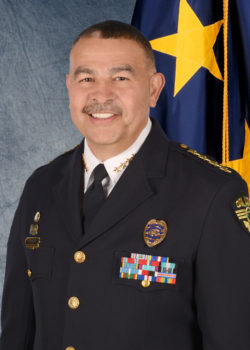 Chief Orlando Rolón was born in Puerto Rico and permanently moved to Central Florida with his family in 1977.  He grew up in the City of Orlando Engelwood neighborhood where he attended Stonewall Jackson Middle and Colonial High School.

On November 8, 1992, he began his career with the Orlando Police Department and has served under the leadership of eight Chiefs of Police. During his career, he served a combined total of 11 years as part of the Chief’s Executive Staff.

Chief Rolón worked and supervised in all four department bureaus, including nine of its 11 divisions. He has also worked closely with City of Orlando Commissioners and the Mayor, strengthening his knowledge about the public safety needs of Orlando residents and visitors.

Chief Rolón is married to Giorgina Pinedo-Rolón and credits her with the person and professional he is today. He also has a son, a daughter, and three grandchildren. Chief Rolón and his wife Giorgina feel privileged to be part of a city where the Mayor and his leadership team are always leading the region in ways to help the most vulnerable.

Over the past 41 years, Chief Rolón has witnessed Orlando transform into the world-class city it is today.  The kind people of this city make him proud to serve and be part of this community.